See the complete report at the link above.

The well anticipated correction in local home prices, based on local incomes, the insane escalation of home prices after Hurricane Katrina, and the same housing euphoria that gripped our Nation from 2004 to 2007, has finally arrived. Despite the appearance of only a -2.13% decline, most of the 25 subdivisions examined belwo show far worse percentage declines indicating that for Baton Rouge Real Estate, 2011 was the anticipated “Year of Correction”! 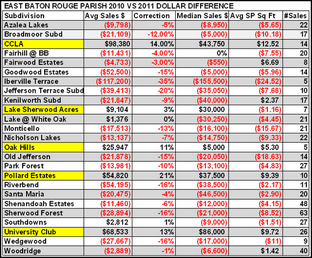