http://www.batonrougerealestatetrends.net/ – Baton Rouge Housing Trends: PMI Study Shows Moderate Risk, 40 Percent Chance Of Home Price Declines. That also means that there’s a 60% chance prices won’t decline. However, keep in mind this latest ranking is from Q2 2010 when the Federal Tax Credit was in operation. Now with the tax credit expiration, local home sales have slowed drastically and I expect in early 2011 when new PMI Group Baton Rouge numbers are released, they won’t be so favorable! Foreclosures are increasing locally and I’m hearing that some locals that need to sll are finally seeing that this isn’t the housing market of 2007 anymore and are beginning to lower their asking prices.

This graph below indicates that the four Parishes that make up Greater Baton Rouge are in the 30 to 50% risk category, meaning that there’s a 30% to 50% chance of lower home prices in the next 2 years. 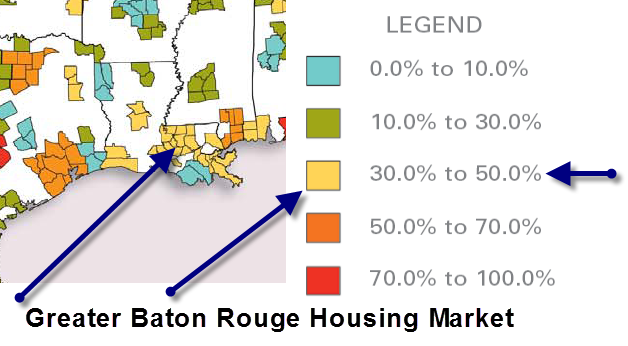 This chart below indicates that the actual Baton Rouge ranking is 40.5% risk category, meaning that there’s a 40.5% chance of lower home prices in the next 2 years.